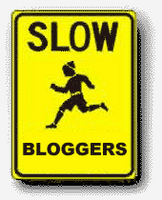 Last week the Channel Four website carried an article on the twenty ‘most influential political bloggers in Britain’. Dave’s Part made the cut, so I devoted a short post to bragging about it. Three people commented.

Then C4 took the post down, leaving me looking a right old wally. I felt I had no choice but to delete my boast. Now it has put the piece back up. Jeez, make your mind up, guys. Am I great or am I great?

Further acclaim comes from top Tory blogger Iain Dale, who is distributing a pamphlet on the 100 best British political blogs at this year’s party conference. Yours truly comes in at 37 overall, and number eight in the list of Labour blogs. Hey, I ripped up my Labour Party card in 1995. But anyway, you can download Dale’s pdf here.

Not bad going for six months’ work. Readership figures are picking up, boosted by the brilliant redesign courtesy of Will. And a few of the more leftist national newspaper journos and Westminster researchers are starting to email goss in to blues.power@virgin.net.

But wouldn’t it be good to have a far left website that has the same sort of clout as Guido and Dale do on the right? For that, I need more inside track stuff. My hero Paul Foot always used to include an appeal to readers for information in his classic Daily Mirror columns. I’d love to continue that tradition.

So … is your company doing something it shouldn’t be doing? Know of a politician up to something naughty? Write in, comrade. Write in.