The psychological flaws of Gordon Brown 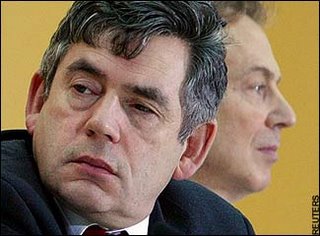 The Blairites have long hinted that Gordon Brown is not quite the full public sector borrowing requirement. Hence Alastair Campbell's famous reference to the chancellor as 'psychologically flawed'.

But what exactly did that nasty little man mean by that nasty little jibe? Psychologically flawed in what way? Blairite author Robert Harris - writing in today's Sunday Times - spells it out for those who didn't quite take the hint first time round:

This is second Times article in a week to virtually come out and state point blank that the chancellor is an aspie. Only on Friday, Anatole Kaletsky spoke of Brown's 'brooding, almost autistic personality'. Note how he says that like it's a bad thing.

For what it's worth, I met Brown a couple of times, more than ten years ago now. Yes, he was instantly rude to me as soon as we were introduced for the first time. And I was astonished by his ability to quote back at me things I had written in criticism of him, weeks and even months previously, for small circulation publications.

But assuming that Brown has had the diagnosis - and lots of middle aged men with the condition have not, as Asperger's Syndrome was not recognised until the mid-nineties - the chances of him admitting it are as slim as the chances of finding out whether or not Blair gave his last kid the MMR triple jab.

My opposition to Brown is based on his New Labour politics. Whether or not he is on the autistic spectrum has nothing to do with it.