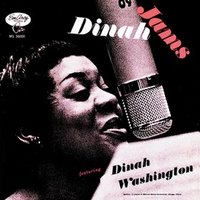 Welcome to the first edition of Saturday Night Music Club, which will become a regular feature of Dave's Part if it finds with any popularity at all.

Given that a fair proportion of my known readership are fully paid-up music bores, the idea is to take a weekly break from the depressing state of British and world politics and just have a friendly chat about good grooves.

The inaugural topic is this: who is the greatest female vocalist of all time? After a long think, I have gone for Dinah Washington, who finishes just ahead of Aretha Franklin, with Irma Thomas coming third.

Washington - real name: Ruth Lee Jones - was born in Alabama in 1924, but joined the pre-war mass migration of blacks from the Deep South to Chicago as a child, and by her mid teens was working that city's club circuit as a vocalist.

She got her big break working with Lionel Hampton between 1943-46, before commencing to cut sides under her own name. Stylistically, she was a one-woman revolution, doing more than anybody except possible Ray Charles to bring gospel phrasing and tonal variations into popular music. Do whatever it takes to obtain a copy of the album pictured, Dinah Jams. It is sublime.

In the best tradition of such things, Dinah had a hard life. She married several times and struggled with alcoholism, dying before she hit 40.

Over to you now. Who would you rate as the best-ever female vocalist? Was I wrong to keep Aretha off the top spot? Anybody want to make a case for the second rank soul sisters? Or even Kylie Minogue, if you really, really must ...