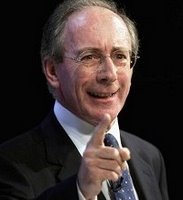 They call it ‘the Baghdad Boom’. The mounting death toll in Iraq has been created a market worth an estimated $2bn for around 100 local and 70 Iraqi-owned private security companies.

And until now, one of the biggest beneficiaries has been UK-listed ArmorGroup, chaired by a former Thatcher cabinet minister and Tory leadership hopeful.

But the bad news for Sir Malcolm Rifkind – pictured left, and still MP for ultrasafe Kensington & Chelsea - is that profit margins in that country have declined in the face of tough competition. That’s the workings of a free market for you.

His gloom can only be slightly lifted by cheering thoughts that conflict is worsening in some other countries in the world, according to this report in the FT [subscription required]:

‘The worsening security situation in Nigeria and new contracts in Afghanistan helped ArmorGroup lift sales by 30 per cent in the first six months of the year.

‘However, the end of a lucrative Iraqi training contract and higher administrative costs meant profits fell at the private security company, chaired by Sir Malcolm Rifkind, the former foreign secretary.’

‘"The situation in Nigeria is significantly worse than before … There have been 24 kidnapping incidents this year. We are no longer a discretionary spend."’

In fairness, I should just add that Sir Malcolm did vocally oppose the war in 2003. Not that it has stopped him trousering his share of the subsequent booty.