Kasparov on the crisis in world chess 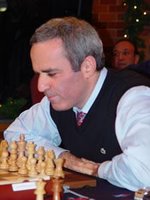 The chess world championships are in crisis, after accusations that incumbent Vladimir Kramnik has been sneaking into his private bog to consult a computer, in what is basically a hi tech version of the technique some of us employed to get through our O-levels.

Yet Kramnik – a boring positional player loathed by much of the chess public, which likes to see grandmasters play 1.e4 and than attack the other player's king, rather than tacitly agree to draws so that they can split the prize money – has little to lose. If the match is called off, he retains his title on the grounds that he remains undefeated.

Toiletgate was sufficiently newsworthy to make the front page of the Guardian on Saturday. You can catch up on the story here.

Today Garry Kasparov,pictured top left and still the greatest player the world has ever seen, has waded into the chess establishment in an op-ed in the Wall Street Journal. The WSJ website is subscription only, but you can read the full text over at Chessbase.

In particular, ‘president Kirsan Ilyumshinov’ (who?) of the ‘Republic of Kalmykia’ (where?) is rightly blasted for the way he runs world chess as if it was an extension of his petty little fiefdom. Ladies and gentlemen, here’s Gazza:

‘My battles with the power-hungry thugs who ran the Soviet and international chess world were politically driven. To me they represented a backwards and corrupt system. They saw me as a threat to their control.

‘The protests and conflicts seen in the current match are of a very different nature and reflect the complete loss of professionalism in the sport.

‘The event is taking place in the capital of the Russian republic of Kalmykia under the auspices of its president, Kirsan Ilyumzhinov, who is also the president of [world chess federation] FIDE.

‘He has created a vertical column of power that would be familiar to any observer of Russia today. He runs the chess world in the same authoritarian way he runs his impoverished republic.

‘After a decade of such mistreatment, the only place that could be found to host this match was his own capital. Serious sponsors rarely want anything to do with Mr. Ilyumzhinov and his organization …

‘Recognizing the failure of his stated goals and low methods, Mr. Ilyumzhinov has lately taken steps to unify the chess world and make long overdue moves to professionalize the organization of events. This terrifies the fixers who would be the first to go under a professional administration …

‘Just like their brothers in spirit in the Kremlin, the chess nomenclatura hope to prolong the anarchy and corruption from which they have profited for so long. Mr. Ilyumzhinov needs this match to continue, but it is he who sowed the seeds of its downfall.

‘For a game associated with brainpower, chess's leaders and its leading players have displayed remarkably little in recent years. They are now paying the price by having their pettiness and incompetence splashed across front pages around the world.’

Kasparov has these days turned to politics, and is chairman of the United Civil Front, a political party in Russia. He’s on the centre-right, but crucially, he’s on the democratic centre-right, and uses his position to speak out against Putin’s drift towards authoritarianism.

Given that Putin’s opponents – think Khodorkovsky here – can find themselves in prison on trumped up charges, he should at least be commended for his courage.