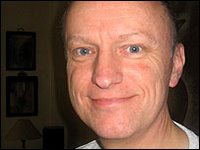 Coulda had class. Coulda been a contender. Well, maybe not. As a teenager, I was never a particularly good guitarist, to be honest. Indeed, I failed auditions for Adam and the Ants and Generation X. True.

Of course, mostof the stars of that era have moved on to other things. Take former Clash drummer Terry Chimes, pictured left, for instance.

This is the man who was billed on the band's first album as 'Tory Crimes'. Brilliant nomenclature, especially at a time when Britain hadn't even been through Thatcherism yet.

According to this article on the BBC website, he is now a respectable chiropractor in Essex. And what a boring bloke he seems to have turned into:

'I felt it was time to completely change - and over the time I'd been a musician, I'd already become a non-drinking, non-smoking, non-drug-taking vegetarian who does yoga.'

Not typical for a drummer, as anyone who has ever been in bands will tell you.

Meanwhile, a quick google reveals that sixties R&B legends The Pirates are still gigging. But back in the eighties, guitarist Mick Green was mini-cabbing in Leytonstone.

I found this out when I ordered a cab to take me back from a rehearsal. The driver asked me what was in my guitar case, and then after a bit of muso talk on Gibson versus Fender lines, revealed his ID.

Over to you now. Anybody know what the big names of yesteryear are up to these days?