Sir Nicholas Stern, the environment and the left 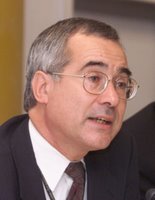 If Britain had a serious left that gave environmental questions the priority they clearly deserve - and sadly it doesn't - than today's review on climate change from Sir Nicholas Stern (pictured left) would present an open goal for the strident assertion of ecosocialist goals.

New Labour - and even Cameron's Conservatives, come to that - talk a good game on green issues. But none of the mainstream parties delivers the goods.

Blair can give a speech on Monday arguing that climate change is the most important issue facing the planet. On Tuesday, his government will back proposals for three new runways in the south of England, so that air travel to and from the UK can double over the next two decades. Joined up politics it ain't.

If the leaks are anything to go by, Sir Nicholas's proposals are based exclusively on market mechanisms. His report is designed to provide a green light to more 'green taxes'. That, in turn, will offer political cover for shifting yet more of the tax burden on to consumers, and a further reduction in taxation on business. That's not environmentalism. It's Thatcherism dressed up in pale green glad rags.

I'm not against higher taxes on Chelsea Tractors per se. But a self-confident green left could push for bolder demands. What about a moratorium on further road building, accompanied by year-by-year targets to reduce car usage by boosting surface public transportation across the EU, in a manner that would maximise job creation, for starters?

There is also a need for better dialogue between the red left and green left. True, there is nothing inherently socialist about Green Party ideology as such. But the Greens - in the UK, at any rate - are unmistakeably an anti-establishment formation.

They are against the war in Iraq, they are anti-racist and anti-homophobic, and they reject the current restrictions on immigration, trade unions and cannabis consumption, to name but a few of their positions.

Where Green and socialist policies coincide - and they often do - then of course both sides should work together. Socialists shouldn't tell Greens involved in the anti-war movement to get lost.

By the same token, there is little point in running our own, purely socialist, campaigns against nuclear dumping or open-cast mining. And there's no reason to reject involvement in existing campaigns that the Greens have taken the initiative to get off the ground.

A left worth having would respond by taking ecosocialism into the heart of the British labour movement. But I'm not holding my breath.