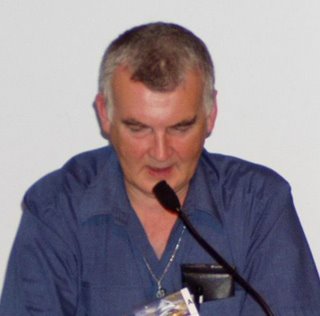 I'm not sure how soi-disant 'Trotskyist libertarian cyberpunk' Ken MacLeod - pictured left - ever achieved prominence as a sci-fi author.

As a proud citizen of what he calls Norlonto - North London Town - I loved every page of The Star Fraction, which features Trotskyist mercenary Moh Kohn fighting the US/UN bad guys in a future Britain that has descended into balkanised dystopia.

The satire is heavy, and a laugh a minute ... provided that the names Harry Wicks or Marcel Bleibtreu mean anything to you.

The International Committee for the Reconstruction of the Libertarian International? A few thousand of us will get the (extremely pointed) gag. Tens of millions won't.

Indeed, the in jokes must be inpenetrable to the 99.9% of the population that didn't do a twenty year stretch on the far left.

But he has obviously pondered - and resolved - the question of how to get socialist ideas across to a wider audience. Just to underline the point intellectually, there's a quality post on MacLeod's blog, pontificating on some recent books on the western Marxist tradition:

Yes, he's name-checking many of the guys - and they are all men, aren't they? - that influenced me as a young student. And ... I never quite got my head round Althusser, either.