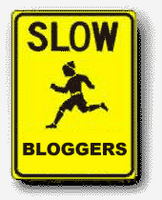 I guess I owe readers an apology. According to Matthew Taylor – Blair’s outgoing chief adviser on political strategy - this blog and others that dare question anything New Labour does are responsible for a ‘crisis’ in the relationship between politicians and voters.

Sadly, it seems the blogosphere has been whipping up a ‘shrill discourse of demands’. Notice how Taylor says that like it’s a bad thing.

Clearly bloggers are overmighty in comparison with the British state. I want immediate legislation to curb what may or may not be said online! Oops. There I go again. Shrill demands. You just can’t win.

Warming to his theme, Taylor told a conference on e-democracy in London today:

‘We have a citizenry which can be caricatured as being increasingly unwilling to be governed but not yet capable of self-government.’

How paternalistic can you get? Not yet capable of self-government? Ooh, go on … rule me, big boy. Rule me, please. I wonder what the good folks who publish the excellent anarchist fortnightly Freedom will make of that?

Taylor goes on to blame the media, including the internet, for what he sees as a crisis:

How can I put this to you, Matthew? Let’s just say that politicians are not exactly making it difficult for bloggers to argue the case. It’s not us that are flogging peerages off the back of a lorry in return for six and seven donations, is it?

Even the most popular political blogs – Iain Dale, Guido Fawkes, Harry’s Place, Lenin’s Tomb – only secure a daily audience just into five figures. It’s hardly mass media-style power without responsibility, that famous prerogative of harlots throughout the ages, is it?

To cap it all, Taylor accuses some bloggers of having ‘anti-establishment’ and even ‘libertarian’ attitudes. Guilty on both counts, m’lud. But then, I was an anti-establishment libertarian Marxist even before they invented the internet.

UPDATE: I love this quote from Guido:

‘Since when has liberty been a problem? Guido intends to be a thorn in the side of corrupt politicians for a long time. There is nothing the vermin can do about it, no media proprietor for them to brandish baubles to, no job you can offer, no bribe we will accept.’

Guido can of course speak for himself. Lucrative job offers and bribes to the email address on the right, please. Cash please, New Labour. A knighthood's not a right lot of good to me at the moment.