Saddam Hussein: working for the clampdown 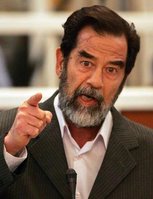 Let's get one thing clear at the outset. Yes, as a democratic socialist and a paid-up member of Amnesty International, I am absolutely against the death penalty on principle.

I have no problem whatsoever in opposing the state-sanctioned execution of vanilla mass murderers, for example, even when they are unquestionably guilty.

Fred West? Harold Shipman? There is not a shred of doubt that either of them carried out the crimes of which they were accused. Life imprisonment was a just sentence in both instances.

Both chose to end their own lives. That was their prerogative. In line with my ideological convictions - inevitably shaped by my father's decision to kill himself rather than go to prison, which he made when I was 14 - I support the right of an individual to top themselves, for whatever reason, should they consciously so decide.

Let's get another thing clear. Yes, I am aware that the trial of Saddam Hussein will be seen in some - perhaps many - quarters of the international left as victor's justice. Then again, it is not only imperialism that pulls the trigger on political opponents. Revolutionaries from Lenin to Castro have also deemed that necessary.

And what Trot hasn't sat in a pub with their mates and cracked bad-taste jokes about who we are going to shoot, come the glorious day?

On balance, though, logic forces me to speak out against today's death sentence against former Iraqi dictator, pictured above. Just don't count me in on attending the protests that will inevitably ensue. For whatever reason, for once I'm not that upset. Some bastards actually deserve everything they get.

'But ha! Gitalong! Gitalong!
And I've given away no secrets
Who's barmy now?'