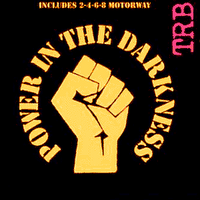 Your nominations in the comments box, please, for the finest angry political rock album ever made. I am expecting substantial write-in campaigns on behalf of ‘Sandinista!‘ by the Clash and the Redskin’s ‘Neither Washington nor Moscow’, which are both indeed magnificent waxings.

But on balance the award has to go to ‘Power in the Darkness’, the 1978 debut from TRB. I dusted that particular slab of vinyl down the other night, and can testify that it still sounds terrific.

Even the cover is a slice of the Trotskyist iconography of the period. And the lyrical content is little short of an out-and-out incitement to revolution (even though Southpaw and Workers Power would denounce it as reformist, obviously).

Lines like ‘The Carib Club got petrol bombed … The National Front was getting awful strong’ still splendidly evoke late seventies Britain on the cusp of Thatcherism.

And just listening to that satirical voiceover from band leader Tom Robinson pretending to be a ‘rightwing Tory’ that terminates four beats before the Ray Manzarek-style organ break on the title track still sends shivers down my spine:

‘Today, institutions fundamental to the British system of Government are under attack: the public schools, the House of Lords, the Church of England, the holy institution of marriage, even our magnificent police force are no longer safe from those who would undermine our society, and it's about time we said “enough is enough” and saw a return to the traditional British values of discipline, obedience, morality and freedom.

To top it all, Robinson must have been the first out gay rock star. Even if he did end up a married dad in the end.