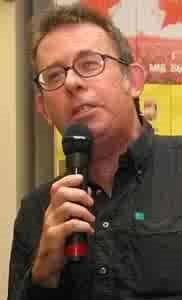 They say Britain is so class divided that even the revolutionary left is controlled by public school boys. But such an ordinary middle-class upbringing is seemingly not enough to get you a top job in the Socialist Workers’ Party.

It’s not as widely appreciated as it should be that Alex Callinicos - pictured left - is not just the great-grandson of Lord Acton, but also related to European royalty. Check out thepeerage.com, scroll down until you find Dr Alexander Theodore Callinicos and then click on the link marked ‘pedigree’.

One reason his fully paid-up posh boy status isn’t more obvious is that the aristocratic connection is on his mother’s side. Alex’s father - a fighter in the Greek resistance to Nazi occupation - married the Hon. Aedgyth Bertha Frances Lyon-Dalberg-Acton. You can see a photograph of her, forming part of the National Portrait Gallery collection, here.

It is the von und zu Arco auf Valley family that have intermarried into various European royal families, presumably putting Prof C on some pretty upmarket Christmas card lists. For instance, the vuzAaV clan are related by intermarriage to His Royal Highness Prince Michael of Kent.

Does any of this matter? Does it detract from Callinicos’s undoubted status as one of the world’s leading Marxist theorists? Not really. Good on him for deserting his class. But as the son of a railworker and a nurse, and grandson of a police constable on one side and a merchant seafarer turned steelworker on the other, I just can't resist a spot of inverse snobbery.