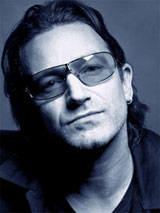 OK, hands up. I admit it. I have seen U2 live. My excuse is that it was in 1979, just after the first single came out, and they were on at the Nag’s Head in Woolaston for 50p. I used to go every Sunday, no matter who was on.

Who could have predicted that they would go on to become probably the biggest grossing rock band on planet earth? Or that the singer would become central to ruling class efforts to somehow make capitalism cool?

Today the Independent – ostensibly a serious newspaper – has been produced under the ‘guest editorship’ of Bono. Page after page is given over to hyping up the Product Red initiative, a feel-good marketing initiative in which a number of brands bump up their prices and then promise to hand a fraction of the resultant superprofits over to the fight against HIV in Africa.

Mr neoliberalism in wrapround shades is seemingly oblivious to the contradictions of his little scheme. The fashion houses that take part – including Versace, Gap, Converse and Armani – get to look like they are ‘doing something’ for the third world, while all the time they rely on sweatshop labour in poor countries to produce their rip-off clobber.

I’ve heard of cheap holidays in other people’s misery. But thanks to Bono and Product Red, expensive sweatshirts are being marketed on the same basis.