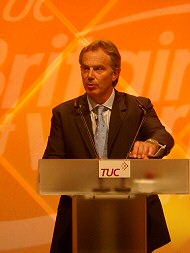 Are you a trade union or Labour Party activist who feels frustrated with Tony Blair? How unfair of you. That sort of talk hurts our prime minister, you know.

Consider this report of his speech to the GMB union conference yesterday, as reported in the Independent. The message is clear. He’s not accountable to us. We are accountable to him.

‘Tony Blair has vented his frustration on Labour activists who yearn for a left-wing government and want him to quit. Warned that working people felt "betrayed" and that traditional supporters had been "alienated" by his policies, Mr Blair delivered a passionate defence of his record.

‘Speaking after a barrage of criticism from delegates at the GMB general union's annual conference in Blackpool, an uncompromising Mr Blair said his Government had achieved "masses" for ordinary people.

‘The Prime Minister was addressing an audience who will be expected to act as foot soldiers in Labour's election campaign. But he said the Government had been elected by attracting a "broad coalition of support" and that a left-wing administration was not going to be elected "some time soon".

‘In response to a question from the floor, Mr Blair said: "You say people are losing faith in the Labour Government, well it's better than having a Tory government. This Government has done masses for ordinary people …

‘It was easy to forget what the 18 years of Tory rule was like, Mr Blair said. "I don't want to see them back ever again. We've make mistakes, but I'm proud of what we've achieved.’

OK, it’s true that over the last nine years, New Labour has enacted some timidly progressive measures. The minimum wage is the one that springs most readily to mind.

But much of what the Blairites claim credit for – such as the recent ruling that bank holidays do not count towards the minimum annual leave entitlement of 20 days per annum – result from EU directives. The Tories would have implemented them as well.

And the slogan ‘vote for us, we’re slightly less bad than the other lot’ is not exactly inspirational, is it? But that’s what seems to count as a ‘passionate defence’ of New Labourism these days.