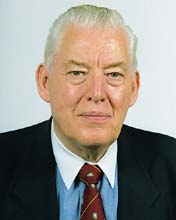 Ian Paisley- pictured left - and his Democratic Unionist Party is usually regarded as the voice of Northern Ireland’s protestant working class. But you want a more accurate take on the social interests it serves, there’s a particularly revealing story in the FT this morning:

‘Northern Ireland politicians pressed Gordon Brown to cut corporation tax for local companies when the chancellor made a flying visit to the province yesterday.

‘Ian Paisley, leader of the Democratic Unionists, the largest party, called for a rate below the 12.5% in the Irish Republic as a way to woo foreign investors. A DUP official said this would be a temporary measure "to help build Northern Ireland up".

‘Mr Brown is understood to be set against breaking up the fiscal unity of the UK by allowing a region to adopt a separate rate of tax. But officials say he is ready to consider some form of financial package if the parties can agree a formula to restore the assembly, which has been suspended since October 2002 when the Ulster Unionists threatened to withdraw their ministers in protest at continued IRA activity.’

Northern Ireland is already a low-wage economy, with workers earning on average just 85% or so of the standard UK wage packet. Why not just go the whole hog and declare it an offshore export processing zone for the benefit of multinational capital?