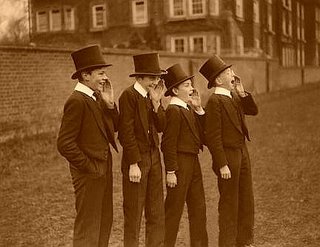 All that 1970s retro-chic class politics nonsense went out with glam rock, didn’t it? Every last Paul Smith besuited man jack of us is tippling from the same bottle of Oddbins New Zealand sauvignon blanc, sitting back as house price inflation lifts our net worth without us lifting a finger. Right?

Wrong, it seems. Not only are the rich getting richer, but their offspring continue to land the lion’s share of the top jobs, especially in law, politics and the media.

Just 7% of children go to private schools. But a new study has revealed that those getting a costly private education make up 76% of judges, 68% of barristers, and well over half of all life peerages and top journalism posts in both newspapers and television. They account for 32% of MPs and 42% of frontbenchers in a New Labour government. A meritocracy Britain ain’t.

The findings have produced no small degree of handwringing, accompanied by the inevitable calls to bring back grammar schools. Inevitably, the moralising misses the real political issues.

A central strategy of both Conservative and Labour government for almost three decades, in response to the upsurge in trade union militancy in the 1970s, has been to adopt policies expressly designed to favour the rich against the poor and the employers over the trade unions. The inevitable outcome has been a sharp rise in social inequality.

Unless the British labour movement actually fights to reassert the social democratic values that created the welfare state, that trend can only continue. As globalisation continues to drive wages down and make even the concept of a steady job unreachable for millions, things may even get significantly worse.