One big union. Not. 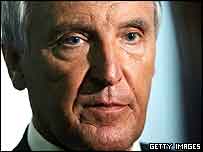 GMB members have voted not to go through with the superunion merger with the T&G and Amicus. Can’t say I blame them, really.
In principle, the old IWW slogan ‘One Big Union’ gets it pretty much right. But I can understand activist concern at the prospect of moving from the extensive regional autonomy traditional in the GMB to a heavily centralised top-down structure.

One thing, though. Forget all that talk about the three-way get-together having too much clout in either the Labour Party or the TUC. Their combined block vote stays the same whether they join forces or not.

And, as I argued on a post earlier this week, what impact do unions have on the Labour Party anyway? Anyway, here’s how TGWU secretary Tony Woodley - pictured above - broke the news to his troops:

Towards a New Union

As you may be aware, the GMB conference has voted, in spite of recent optimism but not surprisingly, to withdraw from further talks on the creation of a New Union.

Obviously we are disappointed at this decision which, in our view, is a missed opportunity for the GMB above all.

However, we fully respect the GMB’s democratic decision and will continue to work closely with them for the benefit of our movement.

As previously agreed by the General Executive Council in February 2005, we will continue our talks to create a new Union with Amicus. It was clear at the time that this, indeed, would be the case if the GMB failed to pick up our invitation to join the talks as an equal partner.

The New Union created by the T&G and Amicus will meet the great challenges facing working people in the 21st century. It will be a democratic and campaigning union which will fight back for employees in the workplace, will take trade unionism out to the millions of unorganised workers, will stand up for equality for all and advance its members’ interests politically – in short, the vision and the need remain unchanged.

There is no doubt that such a new union will, we believe, rapidly become attractive to other unions in this country and will also build ever-stronger links with trade unions around the world as we confront the opportunities of the globalised economy As I told the GEC last week, ultimately this will be much more than a two-way amalgamation.

In the light of the decisions taken by the GEC last week, we will now be working rapidly with our colleagues in amicus to produce a Framework Agreement for the creation of the New Union, which will form the basis for further consultation throughout the T&G.