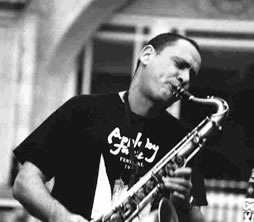 Jazz originated in the more impoverished black districts of New Orleans sometime in the late 19th century. Its dominant practitioners have largely been black Americans. But that's not to say it can accurately be described as intrinsically Afro-American music.

After all, jazz has been influenced by everything from Debussy to Bossa Nova. To argue that only black people can be its custodian is to reduce a universal art form into a mere localised tradition.

So it is at least arguable that Jews have contributed more than most other ethnic groups. Great Jewish jazz musicians include Benny Goodman, Artie Shaw, Stan Getz, Al Cohn and Zoot Sims. Blue Note founders Alfred Lion and Frank Wolff were both Jewish, as were the critics Leonard Feather and Nat Hentoff.

It's even said that Louis Armstrong always wore a Star of David round his neck, in remembrance of the Jewish family that lent him the money to buy his first cornet.

But how comfortable would top saxophonist Gilad Atzmon - who played to an audience of about three dozen at the Vortex jazz club in Dalston last night - feel to be described as as a latter-day product of the Jewish jazz heritage? Not very, one has to suspect.

Atzmon - an Israeli who has seen active service in the Israeli Defence Force - happily declares that he considers the Swedish/Russian fascist and holocaust denier Israel Shamir 'a unique and advanced thinker'. Not that Atzmon (pictured above) is a holocaust denier himself, he insists.

On at least two occasions, the Socialist Workers' Party has invited him to either speak or perform at its annual Marxism conference. Even in defending the decision, the SWP admits that Atzmon at times 'blurs the distinction' between anti-semitism and anti-zionism. Or, to put it less charitably, he often says things that can be interpreted in a racist fashion.

The SWP website still carries a statement from Atzmon that argues: 'For me, Zionism, being a racist expansionist movement, is no different from Nazi ideology.'

Sorry. Zionism is a very different entity to Nazism, as anyone familiar with Herzl's work can testify. There is not one single word of racial supremacism to be found anywhere in the entire text of The Jewish State.

Brutal and oppressive as the actions of the IDF in Palestine are, comparisons with Nazism - even from Jewish commentators - can only be advanced with the deliberate aim of causing offence.

The current impasse in Palestine is the result of specific historical developments that cannot now be undone, short of 'wiping Israel off the map'. The only viable solution is a democratic secular state, with full guarantees of freedom of expression for all confessional groups.

Yadda yadda yadda. What about the gig, Dave? Weeell ... Atzmon played soprano and alto sax, backed by a more-than-proficient stand-up bass and drums rhythm section and accompanied by a keyboardist who took some of the solo honours.

I've seen him in action before, opening for one of the jazz superstars - forget whether it was Zawinul or Corea - at the Barbican. As can be expected, the more intimate venue worked in Atzmon's favour.

It has to be said that he's an original stylist. Bog-standard hard bop pentatonic runs were very little in evidence, and were largely replaced by improvisations around harmonic minor scales with a pronounced Middle Eastern vibe, with a little bid of hot lick klezmer also on show. Yet somehow very few of the riffs hit home.

In short, it was sufficiently different for an entertaining evening's jazz, without being outstanding. Nice enough music ... shame about the dodgy politics.