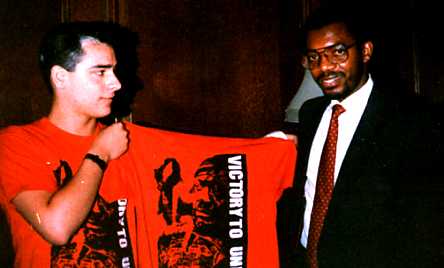 Guido is one of the few British blogs that genuinely deserves the adjective 'indispensible'. His sources in all major parties are second to none. But who is the man behind the website?

Yesterday I noted that the Independent indentified him as a certain Paul Staines, referring to him simply as a former Tory activist. No surprises there, given the general tenor of his blog.

But it turns out that Staines' political track record is rather more interesting than that run-of-the-mill description implies. This is what Sourcewatch has to say about him:

'Paul Staines was the creator of Popular Propaganda, a libertarian marketing enterprise which produced T-shirts and posters.'

Indeed so. The picture shows the young Staines at the 1987 conference of the Libertarian Alliance, presenting a T-shirt glorifying the rightwing - sorry, 'anti-communist' - UNITA guerilla group in Angola to its UK representative. Thanks to commenter Bobbins for the link.

'In the Grip of the Sandinistas', his critical study of a decade of Marxist rule in Nicaragua, was published in 1989. He was a foreign policy analyst with the Committee for a Free Britain before becoming director of the Freedom to Party Campaign and later UK secretary-general of the International Society for Human Rights and editor of 'Human Rights Briefing.'

'Paul Staines is a former member of the radical right Committee for a Free Britain.

'Paul Staines was one of the people behind the Acid House craze of the early 90s and was involved with the "Sunrise" and "Back to the Future" M25 orbital raves that led the police on a merry dance. He features in the best selling "Altered State : The Story of Ecstasy Culture and Acid House " written by Matthew Collin, ex-editor of trend bible ID magazine.

'"Generation Ecstasy : Into the World of Techno and Rave" by Simon Reynolds describes him as "a Libertarian Conservative whose day job was as assistant to rabid freemarket ideologue David Hart, one of Thatcher's favorite advisors."

'David Hart masterminded the breaking of the miner's strike and was a favourite courtier of Thatcher. She would ask multi-millionaire Hart to make suggestions for her speeches. Staines as aides-de-camp was reputed to come up with the jokes. Hart and Staines shared a rightwing hippy libertarian outlook.

Now, as a former punk myself, I obviously see nothing wrong in organising events for the primary purpose of listening to loud music while under the influence of drugs, in the omnipresent hope of copping off with a member of your gender of choice. Even though I was too old to get into all those repetitive beats myself, I thought the Tory legislation to stop kids having a good time was definitely de trop.

But as a sometime Nicaragua Solidarity Campaign activist and ghost writer for Arthur Scargill, I reckon Guido definitely qualifies as the class enemy. I'll still be reading his blog, though.