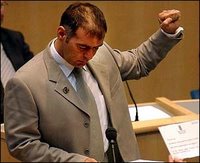 Former Scottish Socialist Party leader Tommy Sheridan’s defamation action against the News of the World opened at the Court of Session in Edinburgh yesterday.

From this account in the Daily Record – the Scottish equivalent of the Daily Mirror – makes clear, there are widely differing accounts of what he Sheridan did, and more importantly from a political standpoint, what he said at a meeting of the SSP executive in November 2004.

Rationally speaking, of course it’s irrelevant how anybody gets their jollies. These days, most politicians survive allegations of routine extramarital nookie. Just ask John Major or John Prescott. But once its gets beyond plain vanilla, you’re almost certainly a goner. Just ask Ron Davies.

In the circumstances, it looks like the SSP executive was right to insist Sheridan to step down. It was the only rational choice. Whether or not the NoTW story stacks up, nobody can credibly lead a political party in the face of salacious talk on this grand a scale.

Sheridan’s honesty is also on trial. I have no way of knowing whether or not he told the truth to the executive. But equally I cannot see why the executive would want deliberately to concoct lies to discredit the SSP’s number one electoral asset.

Only one thing is for certain. The damage to socialist politics from this business – not just in Scotland, but in the UK as a whole – will be incalculable.

ACCUSATIONS AS THE SHERIDAN DEFAMATION CASE GETS UNDER WAY

It was alleged the former Scottish Socialist Party leader had sex with a woman in a hotel room while another man looked on.

And a senior party official claimed he had admitted visiting a swingers' club - but wanted to deny newspaper reports about his conduct.

Allison Kane, the party's national treasurer, said Sheridan told the party's executive he was confident there was no proof of his visit to the club.

Ms Kane, the first witness called in Sheridan's £200,000 defamation action against a Sunday tabloid, also said he was dumped, by the party's I executive when the allegations emerged - contrary to what he maintained.

At the start of the Court of Session hearing yesterday, Sheridan, who arrived with his wife Gail, was branded a "hypocrite and a swinger" by a lawyer for the paper.

Junior counsel Alistair Clark claimed what they wrote was "substantially true". He added: "He says he is not a hypocrite but we say he is.

"The articles which he complains of state that Mr Sheridan visited a swingers' club - a club where casual sexual activities take place.

Mr Clark said the newspaper intended to present their evidence in four chapters.

Cupid's - the Manchester swingers' club which Sheridan allegedly visited with friends, none of whom were his wife.

Mr Clark said: "You will hear quite a bit about the Cupid's chapter. You will hear evidence from people who were with Mr Sheridan and what they saw. Mr Sheridan denies he ever went to this club at the times mentioned."

The Moat House Hotel party - a private event at the Glasgow hotel in 2002.

Mr Clark said: "The evidence we will lead is he attended the party in a private suite and was seen by two independent witnesses having sex with a woman, not his wife, in a bedroom while another man was present in the room.

"Mr Sheridan's position is that he denies he was there and that the events occurred."

The other women - evidence from women who claimed Sheridan had sex with them, although he claimed to have no knowledge of one of them.

The meeting of November 9, 2004 - the date the SSP's executive decided to drop Sheridan.

Mr Clark continued: "Mr Sheridan is on record as saying that he resigned to spend more time with his wife and, at that stage, his forthcoming child.

"He says it's nonsense to say he was forced to resign. There will be evidence led by the defence that he was forced to stand down because of what was said about his private life at that meeting."

The trial would also hear how Sheridan said he was teetotal but drank champagne, Mr Clark added.

The newspaper's senior counsel Mike Jones QC said they published an article in October 2004 claiming an unnamed politician in the Scottish parliament had allegedly gone to a swingers' club and enjoyed threesomes and being spanked by lovers wearing red PVC gloves.

Party treasurer Ms Kane said officials were worried the mystery man was Sheridan and he was called to an executive committee meeting.

She claimed Sheridan spoke frankly at the meeting for 40 minutes.

Mr Jones then quoted from what Ms Kane said were the minutes of the meeting.

"He acknowledged this had been reckless behaviour and, in hindsight, a mistake.

"He asked for an opportunity to fight this and said he was confident there was no proof in existence he had visited the club.

"There was shock and sadness. No one was happy and it was devastating to be there. There were some people in tears.

"There was no support for Tommy's position because we felt it was untenable."

Ms Kane said all 19 people at the meeting voted unanimously for Sheridan to step down as party leader.

The meeting culminated with the executive agreeing to give Sheridan four days to resign so that he could speak to his family.

Richard Keen QC, for Sheridan, said six "honest and decent" executive members had a different recollection of the meeting.

He claimed Sheridan hadn't admitted visiting the swingers' club and that there was a cabal trying to oust him.

Ms Kane replied: "I don't believe there was a plot to bring down Tommy."