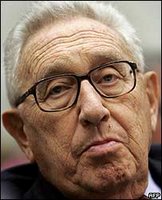 A US military victory in Iraq is now impossible. Says who? No, not just those damn pinko Saddam apologists at the Stop the War Coalition. Henry Kissinger, that’s who.

‘If you mean by clear military victory an Iraqi government that can be established and whose writ runs across the whole country, that gets the civil war under control and sectarian violence under control . . . I don’t believe that is possible.’

PS: I still rate Christopher Hitchins's 'The Trial of Henry Kissinger' - probably the last book he wrote while he was still on our side - as one of the best sustained volumes of investigate journalism combined with political polemic I have ever read. Truly stunning stuff.